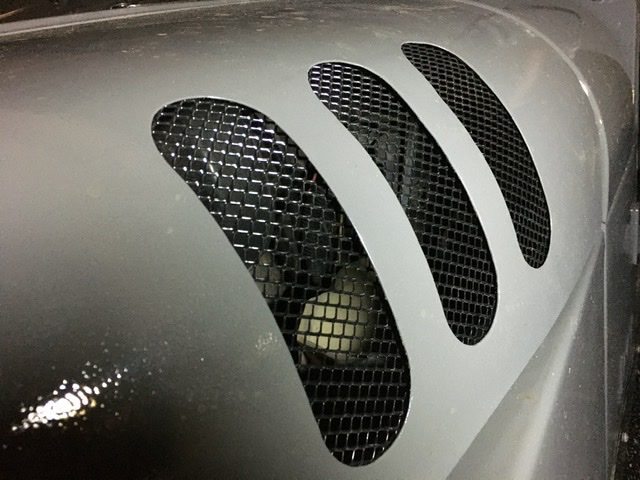 Here is what the hood vents looks like on the KZYJ, up close with the finishing mesh installed. I really like how it turned out. I had planned to use some thin black trim around the holes, which would have looked nice, but after seeing it I really like the clean look of it without the trim and just the cutout with the mesh under it.

On many of the DIY posts out there for custom vents that I found online, people would use a large weave silver mesh. Likely because it was cheap and easy to find at the hardware store. I wanted something with a smaller hole pattern that was black that wasn’t quite so hick.

I stumbled across some of those mesh covers for rain gutters, and after measuring, found that it was the perfect width to cover the vents and the length was sufficient to get both sides of hood done from just one length of the gutter cover mesh.

The gutter cover did have a bend in it, used to help keep the cover istalled over the gutter. I had to unbend and pound that out, which was easy enough to do.

The black mesh, now trimmed to size was then lightly formed around cylinder to get it close to the arc of the hood. The metal was effortless to form. But too much pressure could have easily bent it out of shape.

I then, after giving the under area a thorough cleaning, used some 3M decal adhesive tape That I picked up at the auto parts store, to secure the mesh to the hood.

Getting enough pressure for the mesh to stick took some thought. Along the bottom of the hood I used some clamps that did well. For the top of the vent, I used a rubber mallet… (no, not like that).

I placed the rubber end along the mesh where it touched the top strips of the tape. Then like a kickstand, propped it on the inner fender, under the hood. This let the weight of the hood itself to push down on the tape and mesh allowing it to stick.

It seems to be holding pretty well for now. We’ll have to see what’s in store after we’ve spent some time bouncing around the hills.

What’s next for the KZYJ? Hopefully a front driveline!

Tune into in next time for the diy builder adventures of the KZYJ.