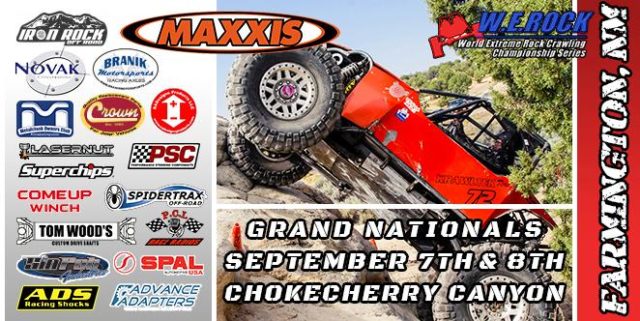 Message from Big Rich Klein, CEO/President of WE Rock Events

Chokecherry Canyon’s Brown Springs has been the home to many of rock crawling’s wildest championship events. Maybe none as wild as last year’s shootout course. Where Jesse Haines went for broke and rolled twice on the same obstacle trying to force Cody Waggoner into having to make the same bonus for the win.

This year’s championship will feature many of the same drivers, but with some new guys pushing the old guys hard. Coming in off a win in Goldendale WA watch for Jacob Reeves to push the other top drivers vying for that much sought after National Title in Unlimited.

Craig Allen is the man to beat in the Pro Mod class, but don’t expect Ryan Maxfield to just roll over and let him have the championship 2 years in a row.

Let’s not forget 6 year old Landen Brown competing in the Mini-Buggy class, this is truly an awesome sight.
A great field of about 40 competitors will be looking to be named Grand National Champion in at least 4 classes.